Does Astute Graphics software work on Apple computers that use the M1 chip?

Yes it does. Astute Graphics is actively working to rebuild its software to run natively on Apple computers using the Apple Silicon M1 chip. In the meantime, the Astute Manager and the plugins will run on Apple M1 without issue, as long as you run Illustrator under the Rosetta 2 emulation.

Apple developed Rosetta 2 technology (present on all M1-based Mac computers) to allow software built for Intel-based Macs to work on its latest hardware.

As instructed, launch Illustrator in Intel Emulation mode to use the plugin. 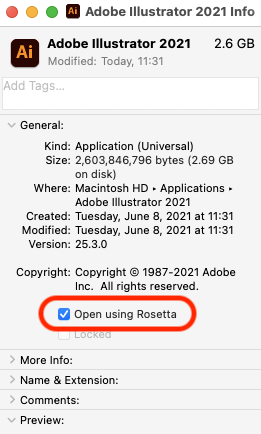 All previous versions of Adobe Illustrator 2021 run on Apple M1 hardware under Rosetta 2 emulation by default and no further action is required.

The Astute Manager runs successfully and seamlessly on Apple M1 hardware under Rosetta 2 emulation. Users do not have to take any special steps or actions to ensure this.

Astute Graphics is currently working on development of Astute Manager v3 which will bring numerous enhancements as well as M1 native operation. We currently anticipate a Q3 2021 release date.

All customers will be notified when M1 native plugins becomes available.